Go Beyond Animation Voiceovers with the #1 GoAnimate Alternative

Murf’s 120+ AI voices in 20+ languages and accents spanning different emotions, tonalities, and styles can be used across a multitude of usecases ranging from games, podcasts, and audiobooks to presentations, product demos, and explainer videos to IVR, presentations, and more.
Open Studio 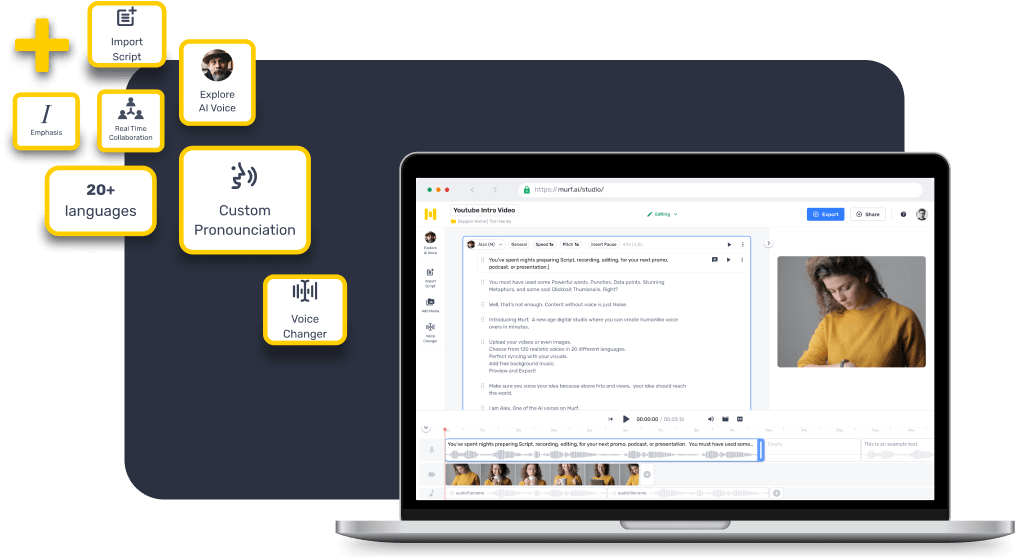 Murf vs. GoAnimate: Who's better?

Murf strikes the perfect balance between providing the right number of features needed to create a good voice over video and ensuring affordability and user-friendliness.

Include Background Music with Video

Ability to Import, and Export Files

GoAnimate—more recently rebranded as Vyond—is a video creation software that allows you to create professional quality animated videos in a matter of a few minutes. With GoAnimate, users get access to a library with thousands of pre-animated assets like characters, actions, templates, props, text boxes, music tracks, and sound effects that can be accessed using a drag-and-drop interface to create engaging animated videos. Additionally, users can input their own assets, including audio, image, and video files to the Vyond Studio and build relevant animated videos for their business needs.

As a high-end animation tool, GoAnimate allows you to edit your video and fine-tune it by cutting and rearranging clips, adding music and sound effects, as well as adjusting the color and lighting. Other notable features of the software include the ability to annotate videos with text, graphics, and photos and add natural-sounding voiceovers to the video.

GoAnimate enables users to add voice over to videos using two types of voices: character dialogs and voiceover narration. Furthermore, the platform enables users to include voiceovers in animated videos in three ways:

How can Text to Speech Enhance your GoAnimate Videos

While GoAnimate is flexible and easy to use in terms of editing animations and creating graphics, what about the audio? VyondAI's text to speech service can convert any written text into audio. The TTS software comes with exquisite features that make voiceover creation very effective and efficient. GoAnimate's TTS service can replace the traditional voiceover requirement, as it is more affordable and faster.

That said, a majority of businesses today operate internationally to target a more extensive set of potential customers. But, finding voice actors to create voiceovers in multiple languages is a tedious task. This is where having a reliable TTS software service like GoAnimate, with a rich library of synthetic natural-sounding voices, can be helpful.

For example, say, you have created an animation video explaining about the usage of an invoicing software to cater to the German and Indian demographics. Ideally, this would mean hiring voice actors fluent in German and Indian languages and accents, spending large amounts of money on arranging logistics, making schedules, renting studio multiple times for recording the voiceover, and more. GoAnimate's text to speech feature eliminates this entire process of recording voiceovers manually and enables users to create voiceovers in multiple languages for the same content in a matter of few minutes.

How to Use Text to Speech for GoAnimate Videos

GoAnimate's TTS helps add credibility to your video. It offers two options to include audio to animation: voiceover and text to speech. To use GoAnimate's text to speech functionality, simply select the 'add dialogue' option while creating an animated video, and a text to speech option will appear. You can choose a voice from a variety of available languages, including English, Polish, Portuguese, Dutch, Norwegian, Danish, Romanian, and Swedish. GoAnimate also has an option to add pauses of variable duration to fit the audio better with the animation. To create the audio clip, enter your text in the box and click the robot icon. The voiceover for your animated video in the desired language and voice in created in seconds!

But that is not all. There is more. Users can also edit and add customizations to their audio. Simply right-click on the TTS clip in the timeline and click ‘Settings.’ Click on the edit (pencil icon) option. You can now change the input text or choose a new voice from the library.  After making the edits, click on the robot symbol to recreate the voiceover. You can also include customization by:

Besides, GoAnimate also allows the addition of pre-recorded audio files, which gives users the option to create voiceovers from other feature-rich tools available on the web.

Add Natural Sounding Speech to your GoAnimate Videos with Murf

Murf is an easy to use text to speech software with a rich library of synthetic voices in a variety of languages. Murf stands out in terms of the natural-sounding quality of its AI voices, which serve as great deal in improving the accessibility of online content.

Murf is the perfect software to add voiceovers to GoAnimate videos, as it can customize the output to a huge extent. Here are a few key features of the Murf platform that helps fine-tune your voiceover and make it more natural and life-like:

Apart from these functionalities, the Murf app also enables users to clone their favorite voice and use that custom AI voice clone for their project through its voice cloning service. This enables you to use a single recording for multiple videos or create a range of voices for an entire cast.

Another notable aspect is that Murf allows users to change the voice of their voiceover from male to female and vice versa as well as convert any recorded audio to a professional voiceover using the software’s voice changer feature.

Now that you have created your desired narration using Murf, follow these steps to include the final audio as a voiceover to the animated video created on GoAnimate:

In minutes, you have a 100 percent natural sounding speech for your animated video.

Why choose Murf over GoAnimate for your Text to Speech Requirement?

This is a tricky question. Both software have amazing features and usability. But if you dig deeper, you can identify the differences. For example, GoAnimate has limited users to 600 characters per scene, whereas Murf has no character limit to typing but has a 15,000 word limit for each file being uploaded to its studio.

While both GoAnimate and Murf support a large library of synthetic voices, Murf is better in terms of voice quality. No doubt GoAnimate has excellent customization features but using Murf Studio's pronunciation feature, users can alter the pronunciation of words in their script with the appropriate phonemes. Moreover, Murf supports collaboration, whereas GoAnimate doesnt.

So, if you are a complete voice solution that not only enables you to create engaging voiceovers but also a compelling voice over video? Murf may be just the ticket.

How to add voice-over to GoAnimate videos?

There are three ways to add voiceover to GoAnimate videos. The first is recording a real-time audio on GoAnimate, the second is using the software’s  text speech function, and the third is adding an existing audio file from your device to the VyondAI studio.

What type of voices can I add to GoAnimate videos?

You can add two types of voices: character voice, which are the characters' dialogues in the animation, and a narrator voice, which includes the background narration, apart from the dialogues used in the script.